My nephew Thorin (Kari’s son) will be a great scary movie companion at some point. We were at the Halloween store this past weekend and there are several interactive dioramas throughout the store. Including a life size little girl from The Exorcist replete in vomit

stained nightgown spins her head completely around. There is a phone in front of the killer from Scream and it reads, “Try me”. If you pick up the phone you hear that creepy voice and then blade noises. There was a really weird one of a rat eating a human. That was puzzling me and really anyone that walked over to watch. Thorin asked for “more” so as Kari was finding a pirate outfit for him, he and I walked from one gross out scene to another. And each time he did the same thing (which I do and pretty much all other horror fans do) he would get super scared and then laugh hysterically.

It is that space between the fright and the release that horror lovers love. Autumn is a lot

of things and one thing that this season brings in spades is spookiness. Trees even start to look creepy right about now with their leaves gone and their pointy limbs exposed. Think of how many hearts have skipped a beat as the bare limbs of a tree along with the wind and darkness has created a phantom on the window pane. Tap, tap, tap.

Our first killing frost occurred in Maine in various towns over the past few days and the sun dips at around 6:30. Soon it will be 4:30 and then the night is long.

Stephen King lives in Maine and is one of the writers that brought me to this state. The first time I ever heard of Maine cities such as Portland or Falmouth was in the book 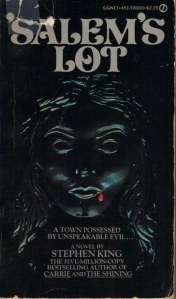 Salem’s Lot. I have a clear memory of drinking Russian Tea at the Holbrook’s house on the river outside of Eau Claire, Wisconsin and both Caroline and I were reading copies of the book. The weather, humid and hot with the river breeze slowly making its way up from the banks but I was chilled to the bone reading about the vampire Barlow. Caroline was a faster and better reader than I so she was way into the book. Periodically she would snap the book shut smooshing mosquitoes between the pages. During that week of reading the book I would accidently pick up Caroline’s copy and would realize I had her’s when I came across a dried smear of an insect on the page.

Vampires don’t scare me so much anymore. The zeitgeist of vampire as ‘misunderstood youth’ is now so much part of the pop culture landscape that I

think we’ve forgot just how terrifying they used to be.

Happy Halloween everyone! I hope you get a good scare this most scary of all seasons. And then laugh, knowing that tap, tap tap on your window pane is just the wind and the bare tree limbs and the night playing tricks on you. Or is it? And thanks to Brother Dan for guest blogging. This most lovable man loves movies. I hope to see many more guest appearances from him.

This entry was posted in boots1965 posts. Bookmark the permalink.

1 Response to All Hallows Eve –