It’s a Wonderful Life is better than you think it is #1: George HATES Bedford Falls (Fucking HATES it.)

Mr. Potter is a horrific, cruel and cold villain, one of screen’s best, if you ask me, BUT in a particularly chilling and dark scene, Potter does what villains in most movies never do. He sizes up George Bailey, our protagonist, and tells the truth about him. Potter honestly and 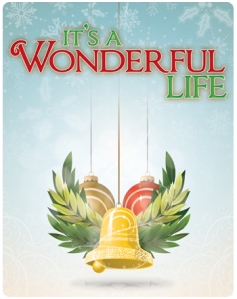 truthfully states George’s situation back to him. (this link is to a colorized version, but the acting is superb… the main part to focus on is from 1:29-2:40, though it’s all great.)

Out of which, after supporting your mother and paying your bills, you’re able to keep,
say ten, if you skimp. A child or two comes along, and you won’t even be able to save the ten.

A young man who’s been dying to get out on his own ever since he was born.

A young man…the smartest one of the crowd, mind you, a young man who has to sit by and
watch his friends go places, because he’s trapped.

Yes, sir, trapped into frittering his life away playing nursemaid to a lot of garlic-eaters.

Do I paint a correct picture, or do I exaggerate?”

George gets mad, but he can’t disagree. Potter is as evil as anything, but he does not, in this, exaggerate. George Bailey does hate the Building and loan. He does hate Bedford Falls, 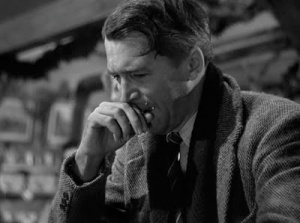 that “crummy little town” that he can’t wait to shake the dust of off himself and see the world.

Early in the film when he’s a young man he asks Uncle Billy, “You know what the 3 most exciting sounds in the world are? Anchor chains, plane motors and train whistles.” His desire to flee and see the world is optimistic and positive, but also desperate. He NEEDS to leave Bedford Falls. “I, uh, I just feel like if I didn’t get away, I’d bust.”
“I couldn’t face being cooped up in a shabby little office. I want to do something big something important.”

Yep, he FUCKING HATES IT. But George doesn’t get away from Bedford Falls because It’s a Wonderful Life has to make him suffer.

There are several instances in the film when George is on the precipice of getting his wish to finally leave Bedford Falls for a better life and something comes up, his father dying, having no money for college, the run on the banks that ruins his planned world tour honeymoon, etc.

And only at the very end is he glad for the hard choices he made. Throughout the film he is tortured by the choices he makes and what choices he feels he is forced to make. Throughout the entire film he is conflicted, frequently mad and still SO desperate to GET OUT! It takes a near suicide and a vision of a horrid dytopia where evil reigns for George to think that maybe he’s better off alive. George has to see people he loves destroyed in terrible ways before deciding his life was worth it and That’s some straight up dark shit.

Kari Wagner-Peck lives with her husband and son in Maine. She is a writer & storyteller who home schools with her son. She is the author of the memoir Not Always Happy: An Unusual Parenting Journey, May, 2017, Central Recovery Press. She has been published at CNN, Psychology Today online, The New York Times Well Family blog, The Huffington Post, The The Good Men Project, The Sydney Morning Herald Daily Life blog, BLOOM and Love That Max among others. Author page: kariwagnerpeck.com Twitter @KariWagnerPeck and Facebook: www.facebook.com/NotAlwaysHappyLive/ Email: kariwagnerpeck@gmail.com
View all posts by Kari Wagner-Peck →
This entry was posted in Uncategorized. Bookmark the permalink.